It was 1895, and Héroult felt he was standing still. He was running out of steam, and to make things worse, his wife died suddenly, leaving two small children, Paul 4 and Henriette 2. 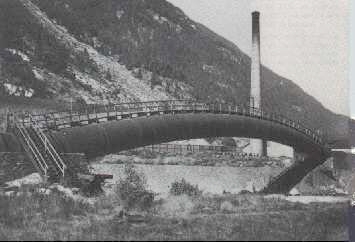 He then turned to the sole task of starting up the plant. Orders began pouring in, and he suggested increasing the production capacity by damming another waterfall, . high, on the other side of the torrent. The project fascinated him. It was another challenge, the very thing he liked best. His imagination and his daring were fired up. He proposed, not a bridge, but a self-sustained conduit in the shape of an arch, supported only by concrete abutments on either side of the torrent. Everyone called the proposal wild and bound to fail. Héroult then suggested placing his mother and his children, the day the floodgates were to be opened, in the center of the conduit, a forfeit that at last convinced his peers. On D-day, the floodwaters rushed through the conduit, and as Héroult had predicted, did not even shake up his loved ones. Once again Héroult's methods had triumphed.

In regaining his confidence in his inventive powers, he also gradually recovered his ability to enjoy life which had deserted him for a few years. He remarried and had three more children, Patrice, Elisabeth, and Anne-Marie. The happy father and ardent husband then decided to grant himself a long honeymoon : a trip around the world, an eight-month long cruise, back in his preferred element, the sea.