On his return to France, Paul Héroult temporarily stepped back from what had been a constant passion, aluminum. But only long enough to renew himself and to think through other inventions. Among them, one was to remain famous and bear his name, the electric steel furnace, which from 1902 on was universally adopted, particularly in the U.S. 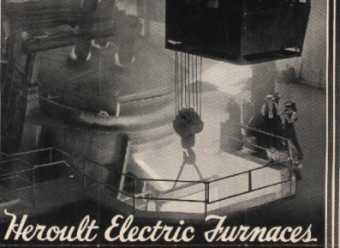 Others did not work out, as the general technology of the period seemed unable to keep up with his overflowing imagination. One example was his "phaneroptère" a flying machine, precursor of the yet-to-come helicopter, or his hydroslip, a sort of boat on runners, lifted by four propulsive vanes, designed with the American inventor Cooper Hewitt.

One might think of Héroult at that stage, closer to Leonardo da Vinci's dreams than to the development of the aluminum industry. But that would be wrong. In 1912 he forged ahead again within a new organization l'Aluminium Français, one of whose objectives was to build an aluminum plant in the United States. The everlasting pioneer embarked on this new adventure, and found himself lost in a wild, mosquito- and snake-ridden jungle, at the foot of the Yadkin River falls in North Carolina, along with his wife and his son, Paul, who helped on horseback with the surveying. But our inventor's health was affected and he had to continue his work bedridden, in the tropical heat, within the old colonial house that had been lent him. Those about him urged him to return to France, and get some much deserved rest, but he would not listen. On the contrary, he seemed to offset his physical handicap by increased determination, until two unfortunate events occurred, the illness of his son, stricken with malaria, which forced him to go home, and the threat of war, which postponed the building of the plant.