The following text is taken from a speech, which Christian Bickert, at the time representing Pechiney of France in the U.S, made to an American audience, on the occasion of the centennial of Paul Héroult's invention, in 1986.

Paul Héroult had none of the attributes of the traditional scholar. He was highstrung, unruly, occasionally hard and insolent; he did not fit the image of wise, disciplined men of science. He loved games, the company of women, travels by land and sea; he was a free spirit in an impetuous body. No comparison with the austere scientist, struggling with stubborn mysteries. His discoveries were not the result of long sleepless nights spent in a laboratory, or of complicated scientific demonstrations.
Héroult loved life, and could not have borne such restrictions. Instead, his inventions appeared suddenly, out of the blue, a stroke of common sense, or of genius, sometimes during a lively game of billiards, his favorite pastime.
An unusual working pattern, to say the least. Perhaps the very key to his success. Héroult imagined more than he invented, and often seemed more of an amateur than a professional, but in the end he proved more prolific than his white-coated peers. Behind his perfect inventions was his artistic approach, passionate yet seemingly disinterested.
Along with his lucid and practical intelligence, and his determined perseverance, went a tremendous love of life in which research and work were basic pleasures. Héroult was not only a remarkable inventor but, in spite of himself, the very opposite of the learned scientist stereotype, alone in his ivory tower, sacrificing his entire life to science. As such he deserves our warmest praise and gratitude for his invention, now in its centennial year, which has contributed so much to our daily life. 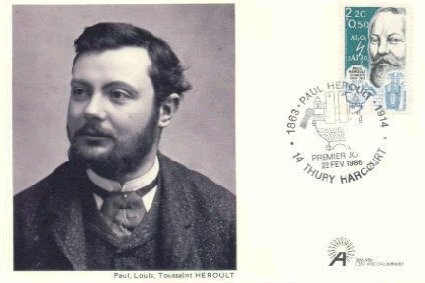